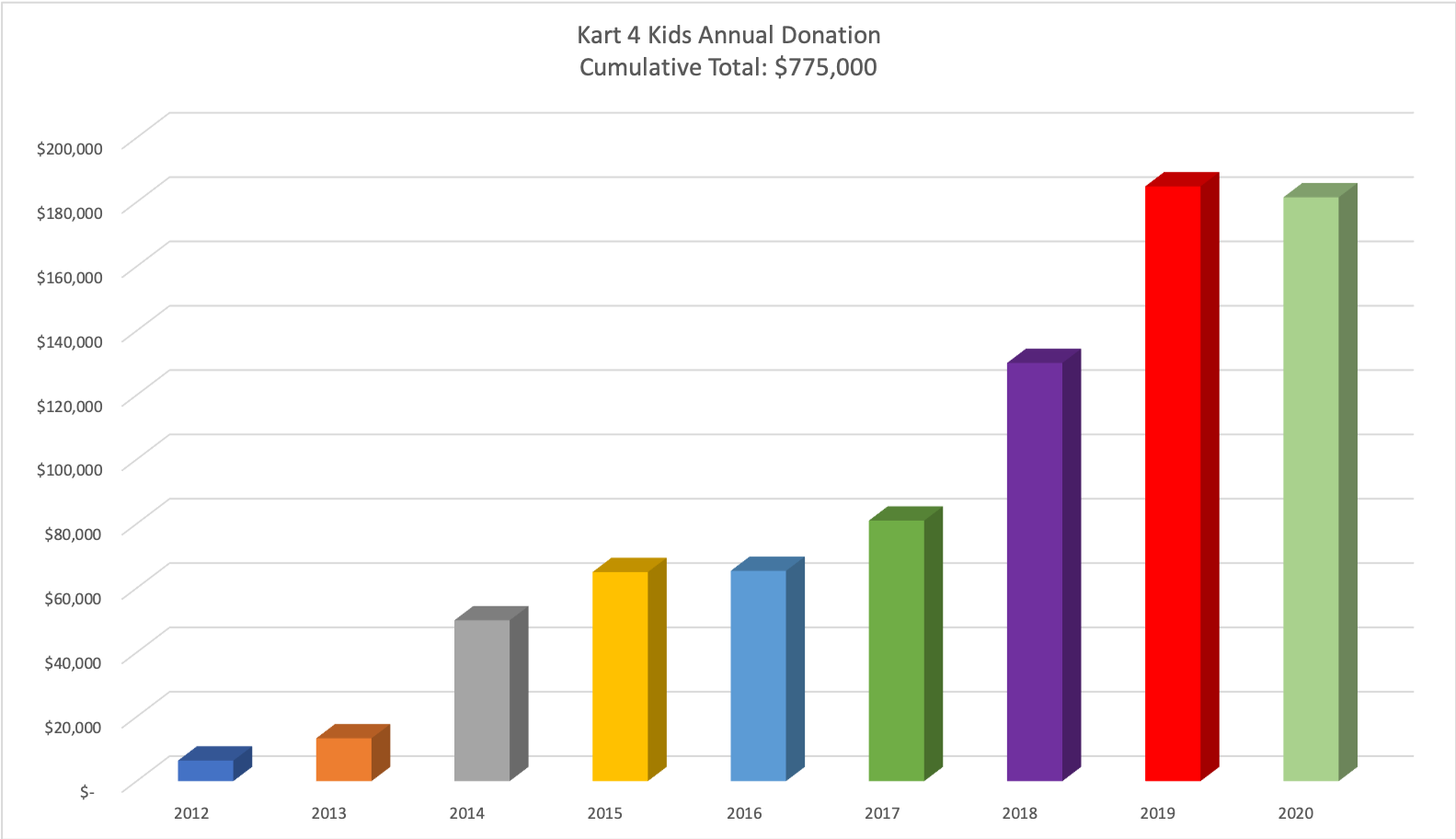 “How can we pay tribute to Dan Wheldon, an amazing race car driver with a huge space in his heart for kids, who tragically lost his life in October 2011 in a racing accident?”

This is the question posed over coffee by a couple of Porsche Club of America (PCA) members in early 2012. The answer we arrived at was to raise money in his name for a cause in which he believed – All Children’s Hospital in St. Petersburg. But how to do that?

And we were off, turning the seed of a thought into “The First Annual Pro-Am Kart Race in memory of Dan Wheldon to Benefit All Children’s Hospital” in 6 scant weeks. Held at Andersen Race Park, just north of Palmetto, Florida, we only had one Pro, Patrick Long, but the 40 amateurs who raced that day had a ball as he raced with all of us, in the process raising about $6700 for All Children’s Hospital.

The second year, our event grew a good deal. In attendance were 10 pros, 40 amateurs, and a core group of dedicated sponsors, led by Alegra Motorsports, Bert Smith Porsche, and Reeves Import Motorcars. Once again, everyone had a fun-filled day while raising about $13,400 for All Children’s. We were thrilled!

In 2014, Patrick Long graciously lent his name to the event and created the Patrick Long Pro-Am Kart Race. He also dramatically stepped up his involvement and became an integral part of not only the race itself, but all of the planning and work that went into its success, and it showed. The 14 Pros who participated included 12 drivers who had just driven the 12 Hours of Sebring, a legend of the sport, a top motorsport TV personality and the eventual 2014 Continental Tire series champion. In addition to Patrick Long, they were Sebastian Bourdais, Colin Braun, Jan Heylen Katherine Legge,Tommy Kendall Bryan Sellers, Tristian Vautier, Jim Norman, Trent Hindman, Norbert Seidler, Jon Bennett, Martin Plowman, and Patrick Lindsey. With their involvement and the fantastic support of the local PCA community, we dramatically grew the event. Patron Spirits, Dale Pelfrey Racing and Rally Gas Stations joined Alegra, Bert Smith, and Reeves to help net $50,000 and become the largest third party fundraiser for All Children’s Hospital.

2015 brought increased sponsorships by Patron and Rally, as well as new sponsors Cardio Access, and Porsche North America. Additionally, Andersen RacePark became a major sponsor, instead of just the location of the race. Pro drivers Andy Lally, Spencer Pumpelly, Ricky Taylor, Jordan Taylor, Shane Lewis, and Elliot Skeer joined the returning Pros. When the dust settled at the end of the day, $65,000 was raised for Johns Hopkins All Children’s Hospital

For 2016, CSI Construction Services and Parathyroid joined as sponsors. Pros Mark Wilkins, Daniel Morad, and Ethan Low joined us as the new timing conflict with the IMSA Breakfast with the Champions prevented some of our loyal Pros, who were Sebring winners, from participating. Despite the mad scramble to balance 14 teams with Pros, we had another successful event. We raised more than $65,300, putting our five year total over the $200,000 mark, with more than $180,000 in just the last three years.

2017 brought big changes, as well as big growth when we became part of the Firestone Grand Prix of St Petersburg week rather than the day after the 12 Hours of Sebring. We could not overcome the conflict with the IMSA breakfast event, so we chose to tie to IndyCar and The Road to Indy as well as the Pirelli World Challenge Series. Andersen RacePark stepped up in a big way, partnering with Kart 4 Kids, Inc. as event organizers, and bringing Rob Howden, the voice of The Road to Indy, as race announcer. Sebastian Bourdais joined Patrick Long as featured Pros.  IndyCar Pros Scott Dixon, Tony Kanaan, Spencer Pigot, and Ed Jones as well as James French, Nate Stacey, and RC Enerson helped us for the first time.  Dario Franchitti was in the auction crowd, quietly bidding to help the cause.  In the end, $81,000 was presented to All Children’s, and our cumulative total stood at $281,100.

In 2018 we did what had been unthinkable just a couple of years before, and with the help of The Firestone Grand Prix of St Petersburg, and the City of St Pete, we moved the race to Turn 1 of the Grand Prix course.  We expanded to 16 fully sponsored teams while adding Takuma Sato, Lawson Aschenbach, Shea Holbrook, Parker Chase, Kyle Masson,  Zach Veach, Jordan King, Gabby Chaves, Ryan Hunter Reay, Helio Castroneves, and Marco Andretti to the Pro ranks.

Cardio Access stepped up their sponorship level, and were joined by team sponsors: IndyCar, Firestone, Honda Racing, Tequila Patron, KHs&S Contractors, AmCap Insurance, The Dikman Company, Reeves Import Motorcars, Bert Smith Porsche, Crown Automotive, and Alegra Motorsports.  Looking around the paddock, it was incredibly gratifying to realize that not only did we have many IndyCar and IMSA champions, LeMans, Daytona, and Sebring winners, but also five Indy 500 winners all helping to dramatically increase our donation to All Children’s by over 60% to $130,000.  The cumulative total now stood at $411,100.

2019’s race was again at Turn 1 of the Firestone Grand Prix of St Petersburg.  We had become quit adept at unloading 3600 feet of barricades, setting up a temporary course and pits on Tuesday, then tearing down, reloading, and clearing the track Wednesday night right after the event.  James Hinchcliff, Colton Herta, Patricio O Ward, Ben Hanley, Matheus Leist, Santino Ferrucci, Felix Rosenqvist, Kyle Kaiser, and Kory Enders stepped in as Pros, with announcer extrordinaire, Rob Howden, doing his usual fantastic job.  Too late to join the race, Simon Pagenaud slipped in to help with the memorabilia auction, which has become a big part of the event.

The wonderful  efforts of Pros, participants, sponsors, and volunteers resulted in an incredible (and never imagined in the early years) $185,000 check to Johns Hopkins All Children’s to help them save kids’ lives, bringing our total contribution to just under $600,000.

As we prepared for another great year in 2020, it was interesting to note that 25 participants in this year’s Rolex 24 at Daytona volunteered their time to help Kart 4 Kids raise money for Johns Hopkins All Children’s Hospital.  We absolutely could not do this without the wonderful support of the professional racecar driver community.  We cannot thank our participating Pros enough.

Only by extreme luck of timing was 2020’s race even able to be run.  Within 36 hours of completion, not only was our host, The Firestone Grand Prix of St. Pete, postponed until an undetermined fall date, but virtually all live sporting events were either cancelled or radically postponed due to the Covid-19 pandemic.

Sabre Cook, Dalton Kellett, and Oliver Askew joined the ranks of the generous Pro Drivers who have helped Kart 4 Kids help All Children’s.  Garage Italia, Boland Mannari, Fresh Kitchen, and Cali came on board as team or major sponsors.

Our total of $155,000 was the second best year ever, and was appreciated even more by All Children’s, as Covid-19 also shut down all live fundraising events.

Our efforts were further enhanced in November by $26,500, when excited passengers paid for the privilege of hot laps in Neil and Jen Valk’s new Corvette C-8 piloted by Sebastien Bourdais just prior to the delayed Firestone Grand Prix of St Pete.

Having been blissfully unaware of the extreme societal changes the COVID-19 pandemic would create, the planning for 2021 began with the basic question of could we or even should we have a race? After much deliberation, we decided to have the race, but it could not be on the St Pete GP grounds, and many of the INDYCAR pros would not be able to risk a COVID quarantine by joining us. (Sebastien Bourdais, our Chairman, being the brave exception)

We would go back to our co-sponsor, Andersen RacePark, on Saturday, April 10 without any conflict from the St. Pete Grand Prix schedule.

Race day started off with a bang, when the youth drivers from the Mottaz Sport Kart Team fulfilled lap pledges and raising $10,560 for the cause. The money was huge for a bunch of kids who had just come up with the idea the week before, but the smiles on their proud faces was indescribable.

When the dust settled at the end of the day, a record total of just over $214,700 was raised to help Johns Hopkins All Children’s Hospital. That put our cumulative total over the ten years at $989,700, tantalizingly close to the $1,000,000 mark.

But we were not finished yet! An additional memorabilia auction in conjunction with the Indianapolis 500 raised another $23,250 taking us over the mark to $1,012,950.

But there is more! Founding co-chair, Page Obenshain, a veteran yacht broker, took a boat in need of repairs, fixed it up, sold it, and donated the profits to Kart 4 Kids for an additional $34,500 to help the kids! That brings our total raised to date to $1,044,200. The generosity of everyone involved coming off the COVID shutdown has been incredible. A huge thank you to all involved.